skip to main | skip to sidebar

Jackson Creek once drained a large area of south Etobicoke, originating just north of Bloor Street West near Highway 427 and flowing in a southeasterly direction to Lake Ontario. Miraculously it still flows through most of its upper reaches north of the Gardiner Expressway, surrounded by the industrial and commercial enterprises that moved in after the Second World War. Had this area been developed as a residential community, the creek would most likely have been buried. Instead, it was shunted off to the sides of large industrial and commercial properties, and though it has been channelized, it is now largely vegetated by trees and other riparian vegetation like bullrushes.


The headwaters currently lie just north-west of the Russell Food Equipment building on Coronet Road. The creek flows along the west side of the rail spur that continues north to the main rail line. The creek once flowed further to the north but the culvert that once contained it is now dry, the food distribution warehouse on the other side of the tracks long ago cut off its source. The creek flows south into a culvert, under North Queen Street, around the former Sam's Club site and then flows freely across the Canadian Linen property, under The Queensway, and south between two car dealerships until it enters a culvert and flows under the Gardiner Expressway. 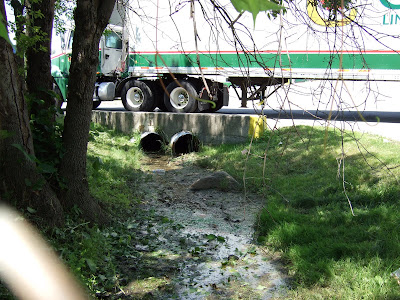 Further south, in the residential community of Alderwood, its course meanders through Douglas Park south of Evans Avenue, and along the western boundary of the now closed Alderwood Collegiate on Valermo Drive. These two portions of the watercourse are totally devoid of any riparian vegetation, and are essentially grassed ditches with intermittent flow. 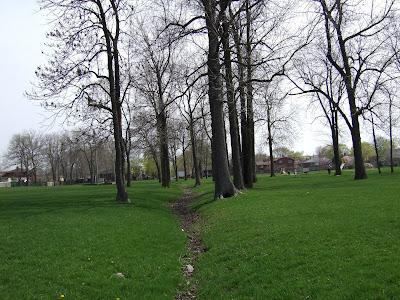 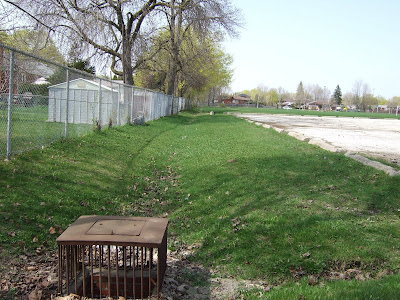 South of here it originally flowed in a south easterly direction through what became a residential community, south of Horner Avenue, under the railway tracks across Town's Road and into New Toronto. The large culvert just south of Town's Road near the end of the street is still there. This would have carried it under the railway track. If you stand there you can hear flowing water. Is this Jackson Creek imprisoned underground?

In New Toronto it originally flowed above ground but was piped at some time. I do not know when. According to the 1811 Patent Map it flowed down to present day Kipling Avenue and Lake Shore Blvd West. This low point continues to exhibit flooding during summer storm events. This is the water following its natural drainage pattern established hundreds of years ago. South of Lake Shore Blvd West it enters the Hospital Grounds.

On the Hospital Grounds its former valley can still be seen. Today it is called the "swale". Underneath Jackson Creek flows through a storm sewer along its former course. 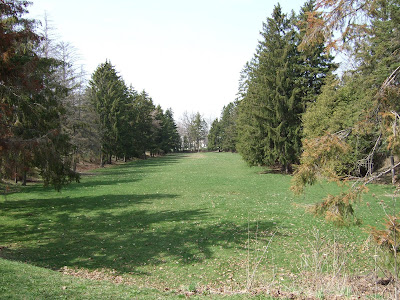 The Swale on the Hospital Grounds - looking south- the former - now modified valley of Jackson Creek 2008 © Michael Harrison 2009
When the entrance to the Hospital was developed in the late 19th century an ornate stone bridge was built across it. The balastrade has been removed but the historic bridge remains buried under fill waiting to be resurrected. 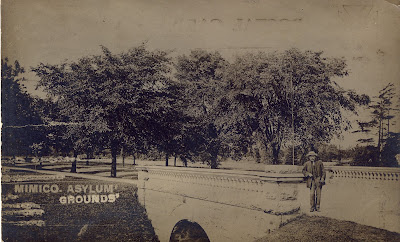 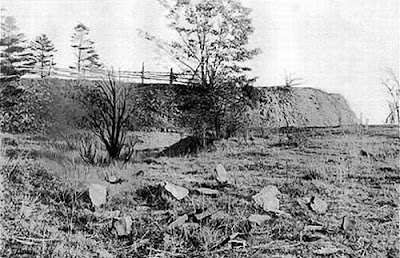 Photo of the mouth of Jackson Creek, circa 1900
When the property containing the mouth of the creek was developed in 1917 by Robins Real Estate as their West Point development they left it alone. 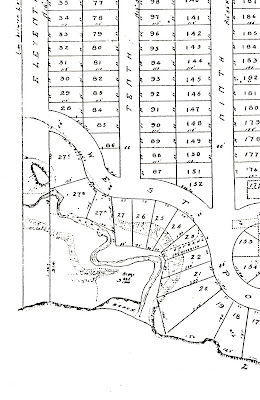 Mouth of Jackson Creek - West Point Development - Robins Real Estate 1917
The mouth of Jackson Creek remained relatively undisturbed until 1947, when it was redirected into a sewer and flowed directly into Lake Ontario at the foot of Eleventh Street. Its former mouth remained part of Rotary Park until 1958, when its rocky beach was deemed unsafe by New Toronto Council and was covered with fill as part of a $90,000 park improvement plan.
Posted by Michael Harrison at 9:06 AM