skip to main | skip to sidebar

The headwaters of Superior Creek originated near present day Kipling Avenue, just north of the Gardiner Expressway, and flowed in a southeasterly direction to Lake Ontario. 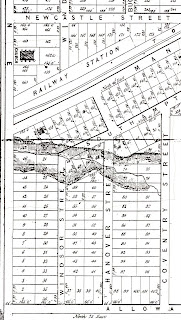 Superior Creek 1856 - a deeply incised valley running in an easterly direction from Royal York Road just south of the Great Western Rail line built in 1855. Christ Church is in the top left hand corner - J.O. Browne's Plan of the Town of Mimico 1856. 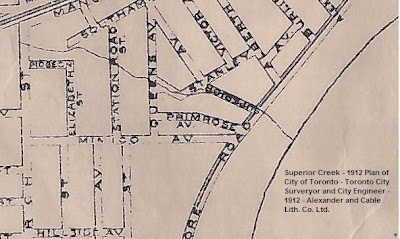 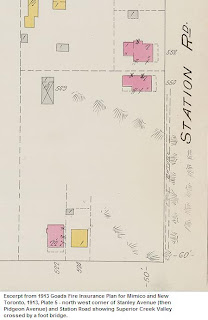 The 1912 map shows exactly where the creek once flowed through this part of Mimico.  Complaints regarding pollution in the creek from local industry and the nearby railway were being made by the local populace.  As a result, the lower portion of the creek was modified and piped in 1915 by the Town of Mimico as an infrastructure project to alleviate local unemployment.

Complaint made in 1914 about the sanitary condition of Superior Creek.

The upper portion of the creek continued to flow freely across north Mimico until construction of new homes after the Second World War led to citizen complaints over pollution and safety. 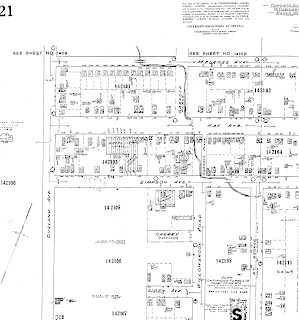 
Articles first began to appear in the Advertiser in the early 1950s when the residents of north Mimico began to complain loudly to Mimico Council of perennial flooding. One resident even went so far as to threaten a tax boycott until the creek was gone. In December 1954, the Etobicoke-Mimico Conservation Authority commissioned a report on the feasibility of placing the creek in a sewer through Mimico. However it does not appear that the work was completed until sometime after 1965. Today, nothing remains of the creek, and a river of black asphalt covers the lower portion of the creek where it once flowed in a wide and steep ravine down Stanley Avenue south of Station Road. 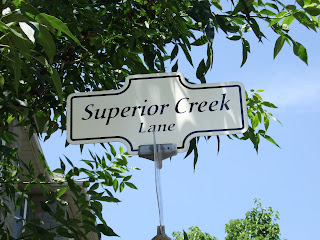 Posted by Michael Harrison at 6:38 AM